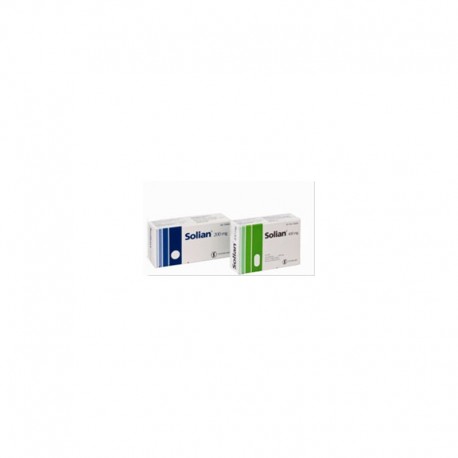 You should read this USE INSTRUCTION carefully before you start using this medicine, because it contains important information for you.
Save these instructions for use. You can need to read again.
If you have other questions, please talk your doctor or pharmacist.
This medicine has been prescribed for you personally, do not give it to others.
When using this medicine, tell the doctor or your doctor if you go to the hospital that you are using this medicine.
We sleep exactly as written in this instruction. Do not use high or low doses other than the recommended dose for the medication.
In this Instructions for Use:
1. WHAT IS WHOLE AND WHAT IS USED FOR?
2. Things to consider before using SOLIAN
How to use 3rd COLOR
4.What are the side effects?
5.SOLIAN hiding

Their headlines are in place.

1. What is SOLIAN and what is it used for?
SOLIAN contains amisulpride active substance. There are 200 mg of active ingredient per tablet. Usage was offered in blister packages containing 60 and 90 tablets.
SOLIAN also has a 60 mL oral solution form containing 100 mg of amisulpride in 1 mL of 30 tablets form containing 400 mg of amisulpride in a tablet on the market.
SOLIAN belongs to a group of medicines (antipsychotic) used in the form of psychiatric disorders (psychosis). It acts by selectively and strongly blocking receptors bound to a substance called a dopamine in the brain.
SOLIAN is used in the treatment of the following conditions:
Positive statements such as auditory, visual and other illusions, thought disorders, restlessness - hyperactivity, delusions (delirium) and / or
Psychiatric illnesses such as acute and chronic schizophrenia in which negative symptoms such as emotional blunting, emotional and social inward closure are seen and
Psychological disorders called psychosis.

2. Things to watch out for before using SOLIAN
DO NOT USE SOLIAN IN THE FOLLOWING

If you are allergic to one of the other substances in the pill that contains the active substance amisulpride or the drug in SOLIAN,
If you are suspected or suspected of having a pituitary tumor or breast cancer that secretes a hormone called prolactin,
If you have a disease called pheochromocytoma which is related to the adrenal gland and which is accompanied by hypertension, or if this disease is suspected,
In children up to adolescence

If your body has overheating (hyperthermia), rigidity in the muscles, blurring of consciousness, and creatinine phosphokinase elevation in your blood (this may require the drug to be withdrawn because it may be indicative of a dangerous condition due to drugs used in the treatment of mental illnesses such as SOLIAN) if you have a condition that increases the risk of onset of ventricular arrhythmia (ventricular arrhythmia); should be used with caution in elderly patients suffering from memory and thinking problems (dementia), such as low potassium or congenital QT interval prolongation. Your doctor will set the appropriate dose for you. If you have any or a few of the following conditions, tell your doctor. Your doctor will apply the most appropriate treatment and / or desire for you.
Severe kidney failure
Sara (epilepsy) disease or epileptic tale
Parkinson's disease
If cardiovascular disease (a disease associated with venous thromboembolism) or risk
If you have diabetes or are at risk for diabetes
SOLIAN treatment should be stopped gradually. Use your medicine according to your doctor's recommendation.