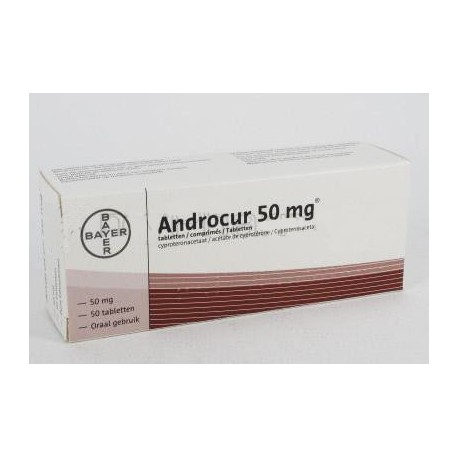 This product is no longer in stock

ANDROCUR®, antiandroj is the most effective hormone preparation.

Conditions induced by androgens such as pathological hair growth in hirsutism in women, androgenic alopecia and acne and increased sebaceous gland function in the seaside, are positively affected by the competitive inhibition of androgens in target organs. The decrease in androgen concentrations resulting from the antigonadotropic effect of cyproterone acetate also provides an additional benefit to treatment.

These changes are recycled following cessation of treatment.

In concomitant treatment with DIANE-35, overfunctions are inhibited.

With ANDROCUR® treatment, libido and potency decrease in men, gonadal function is inhibited. These changes are recycled after cessation of treatment. Cyproterone acetate competitively inhibits the effects of androgens formed in androgens (such as the prostate), testes or adrenal glands.

Cyproterone acetate is almost completely bound to plasma albumin. Approximately 3.5-4% of the total drug level is free. Since protein binding is not specific, changes in SHBG (sex hormone binding globulin) levels do not affect the pharmacokinetics of cyproterone acetate.

Because of the long half-life of the plasma (serum) and the daily intake terminal disposition, cyproterone acetate accumulation can be expected in serum with a factor of about 3 in repeated daily applications.

Ciproterone acetate is partially eliminated by bile, unchanged, and metabolically by the renal pathway and bile (3: 7 ratio). The renal and purine excretion continues with a half-life of 1.9 days. Plasma metabolites are also eliminated in a similar manner (1.7 days half-life).

In conventional studies of repeated dose toxicity, no data have been obtained on the specific risk of drug use in humans. Embryotoxicity / Teratogenicity (female):

In researches on embryotoxic effects, no effect indicating general teratogenic effect was observed before the formation of external genital organs following treatment during organogenesis. The application of cyproterone acetate at the time of the change in the genital organs that is hormone sensitive may lead to feminizing symptoms following high doses in male fetuses. In male newborns exposed to cyproterone acetate in the uterus, no signs of femininization were found. However, the use of ANDROCUR® during pregnancy is contraindicated.

The inhibition of transient fertility with daily oral treatment in male rats does not indicate that ANDROCUR® therapy may cause spermatozoa damage which may lead to fetal malformation or reproductive failure.

Negative results were obtained in the first experiments with cyproterone acetate for genotoxicity. However, further tests show that cyproterone acetate has the capacity to form adduct (and increase DNA repair activity) in DNA and newly isolated human hepatocytes with rat and monkey liver cells. The level of adduct formation in dog liver cells is very low.

In systemic exposures that may be expected to occur in the proposed cyproterone acetate dosage regimen, adduct adduct formation has been observed. The in vivo results of cyproterone acetate treatment are the increased mutation frequency in transgenic rats carrying a bacterial gene that is a target for altered cellular enzymes in female rats, presumably increased pre-neoplastic, focal liver lesion incidence and mutations.

Up to now, clinical trials and appropriate conducted epidemiological studies do not support an increase in the incidence of hepatic tumors in humans. In rodent studies on the tumorigenicity of cyproterone acetate no indications of specific tumorigenic potency have been observed.

Nevertheless, it should be remembered that sexual steroids have increased the growth of hormone-related tissues and tumors.

In general, the present findings do not constitute any objection to the use of ANDROCUR® in humans for the indicated indications and recommended doses.

Experimental investigations have shown that corticoid-like effects occur in adrenal glands in mice and dogs following high doses. This indicates that similar effects may occur in humans at the highest doses (300 mg / day).