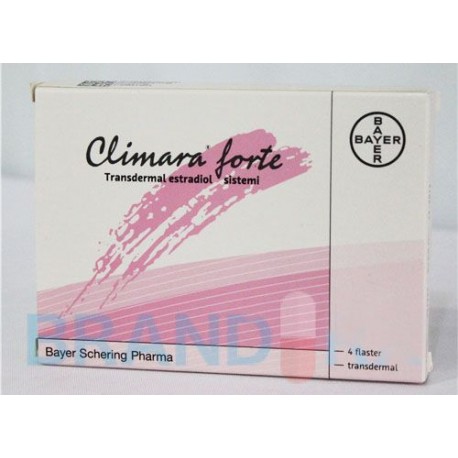 A large clinical trial with conjugated mare estrogens (PPE) and medroxyprogesterone acetate (MPA) combination showed a possible risk increase for coronary heart disease in the first year of use and no benefit was identified during the subsequent use. In another clinical study using only PPE, there was a potential reduction in coronary heart disease rates among women 50-59 years of age, but all women participating in the study did not show additional benefit as arterial. Two major clinical trials of PPE alone or in combination with MPA showed a 30-40% increase in stroke risk as a secondary finding. It is unclear whether these findings are valid for other hormone replacement therapy products or non-oral routes of administration.

Prolonged untreated estrogen effect increases the risk of developing endometrial hyperplasia or carcinoma. Studies have shown that the addition of progestogens to treatment eliminates this increased risk.

Relative risk is directly proportional to increased treatment time. Only the use of estrogen-containing products reduces or does not affect this risk.

Similar increases in the diagnosis of breast cancer, late menopause, alcohol use, obesity have been shown in the presence of factors such as. Increased risk disappears within a few years following the discontinuation of HRT.

In most studies, tumors diagnosed with women using or using HRT have been reported to tend to differentiate better than non-users. Findings about the spread of the tumor outside the breast is not certain.

In some cases, hormone replacement therapy may increase the density of mammographic images and adversely affect the radiological findings of breast cancer.

use of hormonal agents similar to those contained in HRT products has been observed in rare cases with benign and very rarely malignant liver tumors. In limited cases, these tumors cause life-threatening intra-abdominal bleedings. In case of severe upper abdominal pain, liver enlargement or signs of intraabdominal bleeding, a liver tumor should be considered in the differential diagnosis.

Estrogens are known to increase the lithogenesis of saffron. Some women are prone to gallbladder disease during estrogen treatment.

Findings from clinical trials provide evidence that the initiation of PPE-containing products in women aged 65 years or older may increase the risk of hormone treatment with possible dementia. This risk may decrease if the treatment is initiated in the early menopause period, as observed in other studies. The adaptability of these findings to other HRT products is not known.

treatment should be stopped immediately if symptoms similar to migraine or frequent and unusual severe headaches occur for the first time, or if there are possible symptoms of a cerebrovascular occlusion.

The decision to discontinue transdermal treatment should be taken into account if repetitive, permanent skin irritations are observed (eg, persistent erythema, or itching).

There is no general relationship between the use of HRT and the development of clinical hypertension. Small increases in blood pressure have been reported in women receiving HRT, with clinical-related increases being rare. However, HRT should be considered in patients with clinically significant prolonged hypertension during HRT use.

Sex steroids may be inadequately metabolized in patients with impaired liver function. While transdermally administered HRT is not affected by liver first-pass metabolism, HRT should be administered with caution in such patients.

Re-emergence of cholestatic jaundice or cholestatic pruritus, which occurred during pregnancy for the first time or during the use of sex steroids, requires immediate discontinuation of HRT.

Under the influence of estrogen uterine fibroids can grow. If this is observed, treatment should be discontinued.

If endometriosis is reactivated during treatment it is recommended to discontinue treatment.

In cases of suspected prolactinoma, this possibility should be ruled out before starting treatment.

Chloasma may sometimes develop in women with a history of chloasma gravidarum. Women with a tendency to chloasma should avoid sunlight or ultraviolet rays when using HRT.

The following cases have been reported to occur or deteriorate during HRT use. Although there is no evidence of its association with HRT use, women with these complaints and those receiving HRT should be carefully monitored:

The use of HRT during pregnancy and lactation is contraindicated.

Extensive epidemiological studies with steroid hormones used for contraception and hormone replacement therapy have not shown any increase in the risk of congenital defect in children of women who have used such hormones before pregnancy, nor have they shown a teratogenic effect during their early pregnancy.

Low amounts of sex hormone can pass into milk.

on the use of the machine and machinery

Serious adverse effects associated with the use of HRT are indicated in the section ciddi Warnings / precautions.

The following table indicates the adverse effects of Climara. The frequency of the effects indicated was taken from the clinical study results. In clinical studies, the most commonly reported adverse reaction with Climara is skin irritation at the site where the patch is adhered and sensitivity in the breasts (> 10%). Side effects at the site are typically mild and may include erythema, itching, stinging sensations or vesicle formation. The most common adverse reactions seen with Climara are summarized in the following tables: