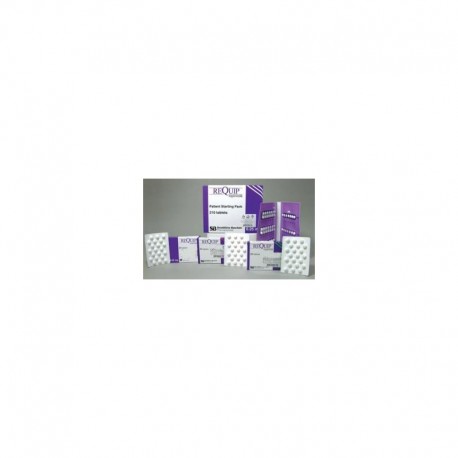 • This medicine has been prescribed for you personally, please do not give it to others.

administration When switching from another dopamine agonist therapy to REQUIP XL, the manufacturer of the drug being withdrawn before starting REQUIP XL should be advised of the drug discontinuation.

Individual dose adjustment is recommended according to efficacy and tolerability.

If somnolence affects daily activity at any dose level in patients, the dose should be reduced. It has been shown that a slower gradual dose increase is useful after dose reduction for other adverse events.

dose should be adjusted depending on the individual clinical response.

The safety and efficacy of doses above 24 mg / day were not established.

As with other dopamine agonists, REQUIP XL should be discontinued in a one-week period by gradually reducing the daily dose.

If treatment is interrupted for one day or longer, treatment should be resumed by dose titration (see above).

PatientsREQUIP XL from REQUIP tablets with immediate release over night.

After switching to REQUIP XL tablets, the dose can be adjusted according to the therapeutic response (see Treatment initiation, Treatment regimen).

The frequency and duration of:

administrationREQUIP XL should be taken daily at the same time, in the form of a single dose per day.

Tablets should be swallowed as a whole, not chewed, broken or broken. REQUIP XL can be taken with or without meals.

Kidney / Liver Disorder In patients with

mild to moderate renal impairment (creatinine clearance no change in ropinirole clearance indicates no need to be performed in this population.

Severe renal impairment (creatinine The use of ropinirole was not investigated in patients with clearance <30 ml / min or liver. REQUIP is not recommended for such patients.

There is no data on the use of ropinirole in patients under 18 years of age. In this group, the use of REQUIP XL is not recommended.

4.4. Special warnings and precautions for use

Due to the pharmacological activity of ropinirole, patients with severe cardiovascular disease should be treated with care.

Patients with significant psychotic disorders at present or in the past should only be treated with dopamine agonists if their potential benefits outweigh the risks.

In patients treated with dopaminergic agents, including ropinirole, impulse control symptoms, including compulsive behaviors such as pathological gambling and hypersexuality, have been reported.

Similar behaviors as described in the literature are mainly reported in Parkinson's patients treated with dopaminergic agents, especially at high doses, and are usually reversible when dose is reduced or when treatment is terminated. In some cases of ropinirole, there are other factors such as the history of compulsive behavior or dopaminergic treatment.

REQUIP XL contains lactose. Patients with rare hereditary problems of galactose intolerance, lapp lactose deficiency or glucose-galactose malabsorption should not use this drug.

4.5. Interactions with other medicinal products and other forms of interaction

Other central acting dopamine antagonists such as neuroleptics and sulpiride or metoclopramide may reduce the efficacy of ropinirole. Therefore, the use of these drugs with REQUIP XL should be avoided.

In a study of digoxin-treated Parkinson's patients, no interaction was found requiring dose adjustment.

Ropinirole is mainly metabolized by cytochrome P450 enzyme CYP1A2. A pharmacokinetic study in patients with Parkinson's disease has shown that ciprofloxacin increases the Cmax and EAA values ​​by about 60% and 84%, respectively. Therefore, it may be necessary to adjust the dose of REQUIP XL when drugs such as ciprofloxacin, fluvoxamine or enoxacin, which are still inhibitors of the CYP1A2 inhibitor, are started, or if these drugs are discontinued.

There is no information about the potential for interaction between ropinirole and alcohol. As with other drugs that have an effect on the central nervous system, patients should be warned about the intake of REQUIP XL with alcohol.